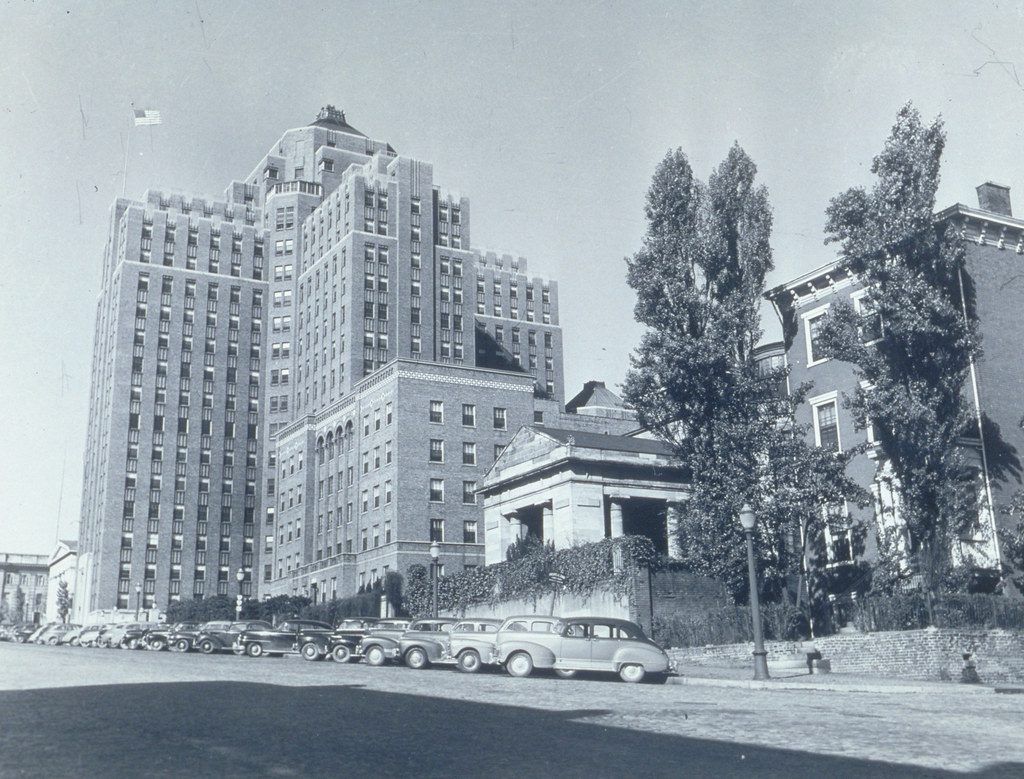 At the turn of the 20th Century, the Historic West Broad Street District, running roughly from Belvidere Street to North 1st Street along the Broad Street corridor, was the furniture and home furnishings center for the City of Richmond.

Most of the circa 1880-1890 buildings were four stories tall with wide retail storefronts and huge plate glass windows and transoms. The buildings featured large atria in the center of the floors that ran from the basement to the roof. At the bottom were the large furnaces that radiated the heat up through the atrium to warm the upper floors where the goods were displayed for customers.  The facades had large windows on the upper floors with attractive moldings and ledges giving the area a specter of grandeur. People would come from the entire Central Virginia Region to shop at these stores and the district flourished for decades.

With the advent of the shopping centers and malls in the nation’s  fast growing suburbs after World War II, Richmond’s downtown and shopping districts fell into a state of decline.  It was not until the late 1980’s when Virginia Commonwealth University’s (VCU) began its aggressive expansion along Broad Street west of Belvidere, that the historic structures east of Belvidere began their long road back to importance and vibrancy. The Federal Park Service and the Virginia State Department of Historic Resources started programs awarding rehabilitation tax credits for historic structures around the same time. Coupled with the national recognition of the VCU Arts School, art galleries and cafes began to appear on this stretch of Broad Street.

In the early 1990’s real estate developers started rehabbing these old furniture buildings into mixed use multi-family on the upper floors and commercial retail and office use on the ground floors. Projects like the Broad Street Way Apartments encompassed 100 apartments and 5 commercial spaces on the 5 through 27 West Broad Street addresses. The 27 Bistro offered fine dining in a very sophisticated setting using the high ceilings and huge storefronts for an attractive look that brought to mind New York City.

Bistro 27 was a popular spot for the cast members of Lincoln during the filming in Richmond.

Local Business icon Jim Ukrop developed on the 100 block of West Broad Street. Developers came from Chicago and restored the old Popkin Furniture Building at the corner of Madison and West Broad into a classic tavern and beautiful apartments.  A local developer transformed the old Tarrants Pharmacy and lunch counter at West Broad and Foushee Streets into the extremely successful Tarrants Restaurant, again with apartments built above. The operator of that restaurant is opening a second location at the corner of West Broad, Adam and Brook Streets serving Belgian food.

Art Galleries, coffee houses and retail stores continue to flourish and there are now hundreds of newly renovated loft style apartments over these businesses and offices. The area is alive again with street life and the early successes are giving developers and lenders the confidence to finish the area as all of the buildings are beginning to be rehabbed. Recent developments include 10 and 12 West Broad Street along with others just off Broad in both Jackson Ward and Monroe Ward.

The most amazing part of the Broad Street story is that its regeneration is really only a decade old.

The density of population will continue no doubt, but the question is how will the area evolve and settle in? Will it become more student-oriented or will the ’empty-nester’ and young professional population elect to call Broad Street home. With more rental options than ownership options currently available, the need to provide residents more permanent and larger options are needed.

Regardless of the mix, the fact remains that its proximity to many of Richmond’s most powerful economic engines (State Capital, City Hall, Bio Tech Park, both of VCU’s campuses), the inherently beautiful structures in which to live and the entertainment options prevalent in the stretch will make Broad Street a lively and viable option for years to come.

Tom Rosman is a partner in the One South Realty Group and heads the Commercial Division.  As a veteran broker of properties which qualify for Historic Tax Credits, he has been involved in numerous projects in and along the Broad Street corridor.  Understanding the rules that govern the use of credits is a prerequisite for representing buyers and sellers for Broad Street properties.